Jeremy got back today from a week-long trip on the tugboat. We thought since he's been on the 12-6 shift (including midnight to 6 a.m.) and his body clock is all messed up, he'd need a day or two to get adjusted before we undertook the drive to MT. However, he thinks he'll be good to go tomorrow, so we'll be off to Montana for my cousin Connie's wedding and to see my Dad after his surgery. We will probably stay the night at a friend's house in Couer d'Alene. That would break things up nicely and make the drive a lot more doable for all of us. Regarding my dad, everything went well as far as the operation is concerned, but they did find more cancer in a lymph node...not the "all clear" we were hoping for. However, there's still a lot of hope. We would appreciate your ongoing prayers for him and Mom especially, and for the entire family. Thanks!
Posted by JSTA at 11:05 PM 1 comment:

Sorry for procrastinating - I know it's been a while since I updated. I've been busy with regular life and also with non-every day situations. A very dear friend of mine will be moving away soon so I've been spending quite a bit of time with her. She's Jack and Emma's mommy (from the zoo pictures), so the kids will be missing each other, too. Thankfully, they will be moving to
Coeur d'Alene, ID, which is right on the way to the grandparents' houses in Montana, so we will be able to visit them fairly frequently as we visit our own families in MT. Jeremy has been on a tugboat trip since last Tuesday, so it's just been me and the boys, which makes life seem busier. I've also been doing a bit of researching on carcinoid tumors, because my father found out last week that he has this type of cancer. He is having major surgery to remove the tumor and the piece of intestine where it is located this morning, so PLEASE PRAY for him today and as he recovers over the next few days (or weeks). Jeremy, the boys, and I are planning on going back to Montana to visit the family towards the end of this week, so you could pray for safe travel, as well. :-) We were planning on at least the boys and I going back to MT for my cousin Connie's wedding this Saturday, and when we found out my dad was going to be having major surgery we really wanted Jeremy to come, too. Thankfully, he was able to get a week-long trip with just the right timing so that he can come back, too. We are going to leave on Wednesday or Thursday, and Jeremy will come back to Oregon on Sunday. The boys and I are going to stay in Montana a bit longer and come back when we feel ready (it would be too much driving for the boys to endure if we went on Thursday and came back Monday). So we've been busy thinking about and preparing for all of those things.

I have one other interesting incident to tell you about. Yesterday the boys picked out bright yellow fabric with John Deere tractors on it to make a special pillow for Grumpy. The plan is for him to keep it on his lap so that the boys have an easier time remembering that his tummy is owie and they can't jump on him or rough-house with him (which will be very different than any experience they've had with their very active Grumpy - he's usually their horse and their wild bucking bull and their wrestling partner). I decided to make each of the boys a matching pillowcase out of this same special fabric. I hung out at my friend Christina's house last night and borrowed her sewing machine to make the pillow cases. As I was making the very last stitch of the very last pillowcase, I was chatting away and not paying very close attention to what I was doing. I don't really know what I was attempting to do, but somehow my thumb got in the way and I ended up putting a big fat sewing machine needle all the way through it. You readers are fortunate that we didn't have a camera on hand - it was quite a sight! More of the needle was protruding through the bottom of my thumb than was sticking out the top. The needle seemed to be stuck in the fabric, so we had to cut into my finished pillowcase to separate my thumb from the machine. Aric's pillowcase will always have a memorable notch in it. :-) Then we had to remove the needle and the foot from the machine because they were all stuck together. It was pretty humorous to see this human sandwich: top of needle, thumb, sewing machine foot, yellow fabric, bottom of needle. I was surprised that it didn't hurt worse than it did. We put our heads together and formulated our plan of action. We discussed going to the ER, but we needed someone to stay with the kids and I couldn't very well drive myself, because I was a little bit in shock. We called Rebekah, a good friend from church who is a mother of 5 and who's got a strong stomach, and when she came, she offered to pull it out. I had been wanting to do that, anyway, rather than go spend hours waiting around at the ER (by this time, it was nearly midnight). Now that we had enough hands to get it out (I don't like puncture wounds; I'd much rather have blood and gore than punctures to deal with, so I didn't trust myself to be part of the "operation"), we assembled a motley assortment of garage tools. In the meantime, we allowed a few Tylenol, a lot of ibuprofen, and an ice-pack to take effect. As Christina held my thumbnail in place with a wrench, Rebekah used needle-nose pliers to swiftly extract the needle. Then I soaked my thumb in a succession of cocktails - first rubbing alcohol, then hydrogen peroxide. Then we hung out for another hour having uninterrupted girl time for the first time in a long time! :-) This morning, I will go get a tetanus shot since it's been about 12 years, but other than that, I'm doing quite well. My thumb's a bit tender and throbbing, but does not hurt nearly as bad as I would've expected. I spent the night at Christina's and she will watch the boys while I go get vaccinated. Thank goodness I was at her house and not my own when all this happened! I thank God for my good friends! I'll try to keep you posted on whatever exciting occurrences come next during this grand never-ending adventure I call my life. Hope you all have a great week!
Posted by JSTA at 7:33 AM No comments:

It's been a while since I wrote, so I guess I'd better start by updating Aric's "condition." His nose has been healing better than I expected it to, and actually looks pretty good. However, his black eye, which had been gone for quite a while, has reappeared. No, it's not some frightening bruise disorder; it's just that Aric is a "bruiser" of a kid. Last night, we heard a thud followed quickly by Aric's screams. I thought maybe he'd fallen out of bed, but we discovered him in his crib with a bright purple spot swelling under his eye. From what we can gather, he was holding onto his sippy cup and the crib rail while jumping up and down. Somehow, he managed to land with his eye socket on top of the cup. Voila! Black eye number 2. Here's a picture of his old and new facial injuries. 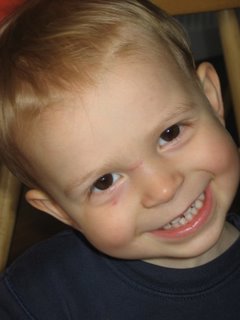 I wanted to post today with some new pics, so I spent much of the morning trying to OBTAIN said pictures. Aric was not cooperative at all. He did not want his picture taken, so of 65 or so pictures, probably 20 were of his ear or his hair as he turned away and/or ran away from my camera. As you can see, we finally did manage to get a few keepers that were actually cute. :-) Along the way, though, I managed to capture Aric's "look of the month." He's been looking up at us from furrowed eyebrows a lot lately. He uses them when he's mad at us, when he's in trouble, when he's sad, when he wants something, and when he is trying to make us laugh. It's an all-purpose sort of a look, I guess. Anyway, here's a picture of the "eyebrow look." 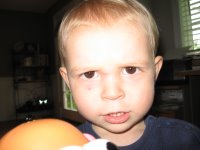 Speaking of eyebrows, Taylor woke up at 5 a.m. today and announced that his eyebrows hurt. I laughed and sent him back to bed. When he woke up for the day a few hours later, he had a fever and insisted that his eyebrows still hurt. I don't know what is ailing him, but I suspect he's experiencing some sinus pressure with his sickness. I have never heard of a medical complaint originating in someone's eyebrows before. I guess there's a first time for everything (at least there is when MY kids are involved! :-)

When we began the "photo session" this morning, I posed the boys with "Mr. Bob the 'Tato Head." All three "guys" wore funny glasses for one pose before Aric discarded his glasses and began fighting off the camera. The picture turned out pretty funny, so here they are, my "usual suspects." 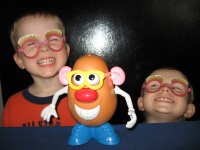 You may be wondering why I used "etymology" in my title. I was inspired by watching the National Spelling Bee Finals last night on TV. Watching those junior high kids battle it out (and seeing a pale blonde girl win it all) really stirred my old "spelling bee" memories. Jeremy was surprised how into it I got, but the spelling bee was a really big deal to me in junior high. Those of you who knew me then aren't surprised by this revelation, but the truth is that I'm a big nerd at heart (in the best sense of the word). I still remember what words put me out of each spelling bee and I still have fond memories of the "hope" that I, the county runner-up, might take some ill finalist's place at the MT State Bee. I could ramble on for quite some time about my "glory days" (just ask Jeremy - he had to listen to it all evening! ;-), but I'll wrap it up now and get back to my "glorious present" - cleaning up the lunch mess and doing a few more loads of laundry. :-) Before I go, though, one final tie-in to etymology. This fancy word, used quite a bit in spelling bees, simply means "word origin." While it should reveal where a word came from and how it moved from it's original language through any intermediate languages and into the language in which it is commonly found today, my favorite "etymology" isn't quite that complex. However, it is still the explanation of the origin of a phrase, so I figure I can still call it an etymology -- the etymology of "Mr. Bob the 'Tato Head." It's not just that Taylor named his Mr. Potato Head "Bob." The origins of two separate characters actually came together in my toddler's mind to form this new title. Taylor was familiar with "Bob the Tomato" of VeggieTales fame before he met Mr. Potato Head. When he got the spud last December, he immediately combined the old and the new and dubbed his new friend "Mr. Bob, the 'Tato Head." Now that's etymology for you!
Posted by JSTA at 12:13 PM No comments: