I went to a handgun class for women last weekend. Even though I grew up in a family that hunted, I've never really had much to do with handguns. I've always been uncomfortable around them, and this class seemed the perfect opportunity to familiarize myself. The only time I've ever shot a handgun was a number of years ago when Jeremy and I took off into the woods here in Oregon. I tried to hit a tin can from 5 yards and couldn't, so I've always considered myself a terrible shot. However, this class taught me the basics of shooting, and apparently, I'm not such a bad shot after all. Below are two of my targets, and the "prize" I won for being the only one to shoot out the entirety of my "red dot" at 10 yards (the #4 target). The targets show my shooting from distances of 3, 5, 7, and 10 yards. I really enjoyed target shooting and I'll probably keep bugging Jeremy to go with me until it becomes our date night habit. :-) 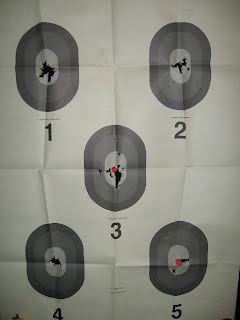 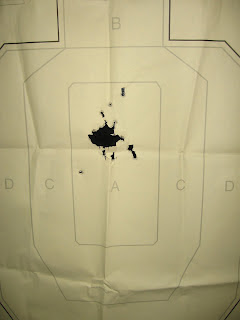 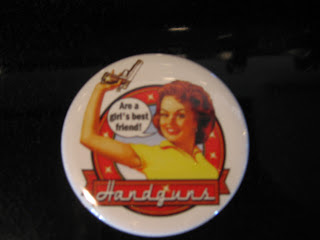 "HANDGUNS ARE A GIRL'S BEST FRIEND!"
Posted by JSTA at 5:21 PM No comments:

I can't believe I forgot to mention this in the last post. Aric fractured his arm about two weeks ago. It was nearing bedtime (always the time for accidents at our house) and he was carrying a load of toys when he tripped over another toy and fell down. By the way he was crying, I knew he was really hurting. I told Jeremy I thought his arm was broken. We waited for the tears to subside, then examined his arm. He could move everything, his wrist and fingers seemed fully functional, and we could squeeze his arm anywhere without it hurting. We guessed he'd just twisted or strained something and decided to wait and see how he did the next day. The next morning, he fell again and complained about the same spot. We set up a doctor's appointment for the afternoon, but when he woke up from his nap, he seemed totally fine again. Since it was a very busy day at the doctor's office, I decided to let someone else have our coveted appointment. We watched him over the weekend and he seemed fine, but Monday morning we were playing at a friend's house when he fell onto the sidewalk. Again, he caught himself with his arms, and again, that left forearm seemed to be really hurting him. After a few days without complaint, I had begun to think he was probably alright, but since he was complaining about precisely the same spot again, I knew we needed to go see the doctor.

The doctor examined the arm thoroughly, twisting and squeezing and moving it in all sorts of directions. All Aric did was giggle shyly. The doctor said he really didn't think anything was wrong, but if I wanted to have an x-ray done, I could. I knew we needed to know, one way or the other, or I'd be back in the office in another day or two. He went to the x-ray room, where he was SO brave he earned a bouncy-ball for himself and another one for big brother. The doctor came back seeming rather surprised. He said, "Aric must have a really high pain tolerance, because he does have a fracture." I already know that my boys have incredible pain tolerances (I think in large part due to heredity - thanks, Dad! :-), so I wasn't surprised at all. Now he has to wear a removable splint until the Fourth of July (his personal Independence Day). He doesn't really like it, but tolerates it fairly well.

He thought he'd come up with a great idea recently. After a bath (the only time he's allowed to be out of his splint), he raised his uninjured arm and brightly announced, "I have a good idea, Mom. Let's put it on THIS arm." I know he's tired of it, but thankfully it is his left arm rather than his right, and he's keeping it on much better than I would have expected.
Posted by JSTA at 1:55 PM No comments:

On Monday, Jeremy starts training to operate tugboats. It's an exciting new advancement and we are very thankful for it. However, it means a change in our schedule. Jeremy will be working "regular hours" M-F in the harbor and then he'll be training whenever he can on top of those regular hours, so we won't have the big chunks of family free time we've become accustomed to after upriver trips. It will be a blessing to experience having him home every night, but we will be more tied to the Portland area than we have been.

One of the ramifications of this change is that Jeremy won't necessarily have time off around his birthday later this month. Since it's his 30th (and he's been dreading it for at least the past 5 years), I wanted to do something memorable for him. This morning at church, there was a note in his Bible that informed him he was being kidnapped. We had some good friends watch our boys for the afternoon, so just Jeremy and I left church and he had no idea where we were headed. He didn't follow the kidnapping note's instructions very well...he was supposed to be the passenger! Since he ended up in the driver's seat, I had to tell him which towns we were headed toward along the way, so I thought for sure he'd guess where I was taking him, but he never could! He thought we were going to tour the Evergreen Air Museum (which we ended up doing later in the day anyway)...he thought we were gonna visit our friends who live in that part of the world...he thought he might have an airplane ride. That last guess was VERY close, but not quite accurate enough. I had arranged for us both to have a mile high glider ride. However, I missed the part about there being a weight limit, so we weren't allowed to go at the same time (guess we gotta lay off the ice cream! :-). I decided to wait for the proverbial "next time" and Jeremy went up for his mile high ride by himself. He got to fly it for most of the time it was in the air and he reported really enjoying it. He says it's amazing how quiet it is to be up there without an engine attached to you. After he came down, we went to the Air Museum because it was right across the street. It's where the Spruce Goose is housed and it's an impressive experience. It was a very fun day!

PS - the pictures at the bottom are of our newest vehicle getting its first wash, and the boys washing a vehicle for the first time. They were very good helpers and had lots of fun with Daddy that day. 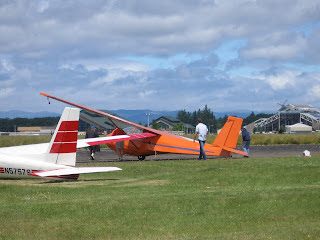 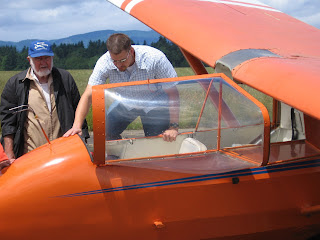 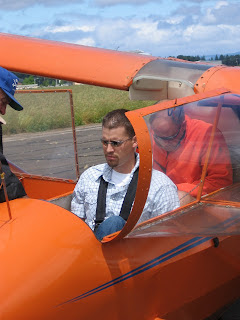 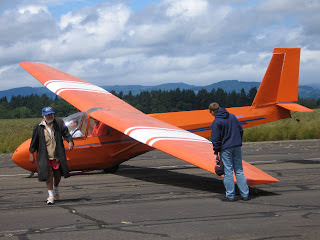 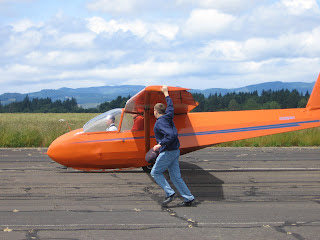 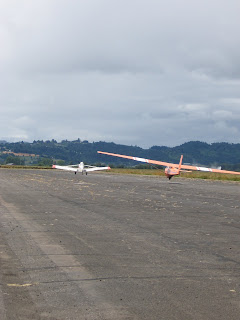 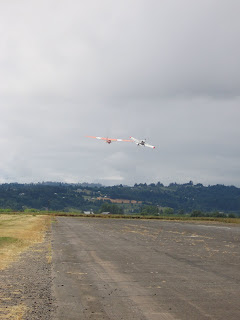 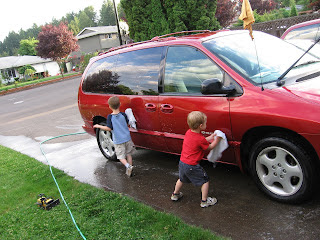 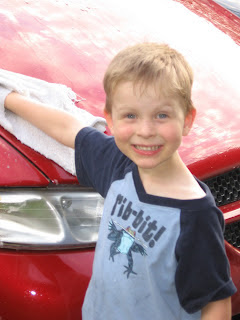 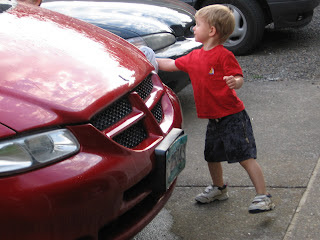 Here is a picture of Taylor's new skill. He is an expert tree climber. The cherry tree in the picture is easy to access and he's a pro at climbing it. This morning, he conquered a new tree. It's lowest branch is so high he had to jump to reach it with his hands, but once he had, he was able to pull himself up and start climbing. It's amazing to see him doing such big things! He's a very grown up four-year-old. 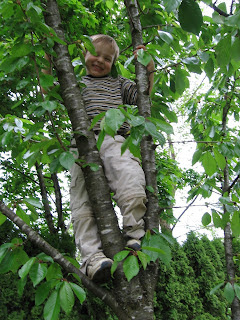 On Mother's Day, we acquired a new tent (the four of us weren't able to comfortably squeeze into our two-man tent any more). It's a beaut! We tried it out a few days ago and it works perfectly. We went to the coast and spent the night at Devil's Lake Campground in Lincoln City. It's pretty amazing to see a freshwater lake and the ocean in such close proximity. We rented a little motorboat and puttered around the lake for a few hours. The boys both learned to operate the motor and are quite proud of the fact that they know how to drive a boat. In the morning, we went to the beach and took a very long walk. It was an almost wind-less day, which we've never experienced on the Oregon coast before. We had a very good time and look forward to many more tent-camping adventures this summer. 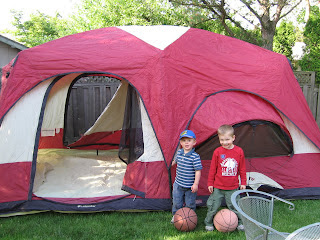 The other big thing we accomplished recently is yet another house project. We got new garage doors a while back and decided they could use a little dressing up. This is the process we used to put stone facia on the front.
First, Jeremy put this wire mesh over some paper. 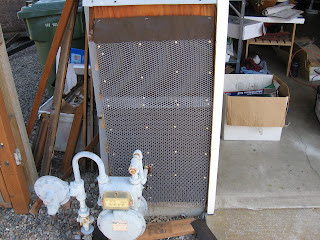 Then, the boys helped him put on a "scratch coat" 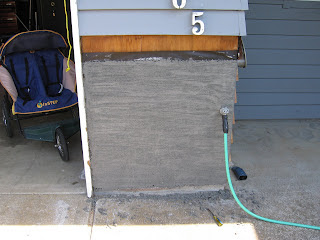 Jeremy and I worked and worked at creating a decent design. It was quite a puzzle and it wasn't as easy as we were expecting it to be, but it was a very fun project (especially now that we are done with it! :-) 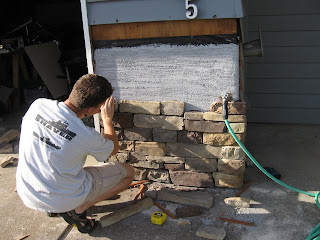 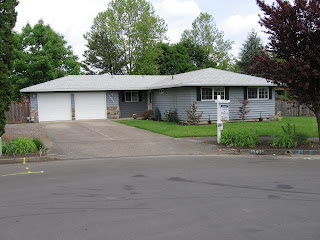