Here's the "finished" product - I'm standing in our dining room looking at our eating bar and back into our kitchen. It's so exciting to have all the walls up. Over the next week or two, we'll be having them mudded, taped, and textured. Then we'll paint, try to get the floors in and try to get moved in. We'll see whether we beat Ascha to our respective "finish lines." We've got 30 days from today until her due date. :-) 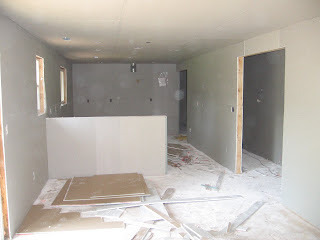 Grandma and Grandpa came out to visit and help us for a while. We are so thankful for all the help and we (gotta love that collective "WE" - I didn't do a whole lot, but everyone else worked hard) took advantage of a beautiful day yesterday to do quite a bit of outside work. The lawn got mowed, trees got trimmed, beds got weeded, and rocks got removed from the lawn. (The boys have decided they don't like picking rocks, but they did manage to get the job done. :-) Here's a picture of the boys with "Whiff," the grandparents' dog. They love her dearly and enjoyed playing with her and following her around throughout the day. 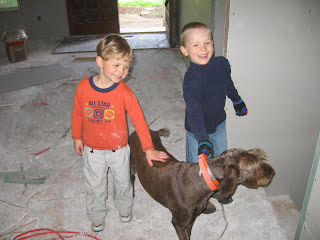 Here they are helping Grandpa tune up the lawnmower. 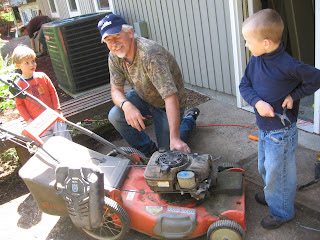 And here's Aric helping Grandma weed one of the front beds. 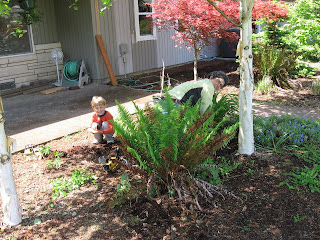 Ladies and Gentlemen, We Have WALLS!!!

Sorry about the broken videos in the last post. I'll keep trying to get them up. Just wanted to show off our latest progress because it's so exciting...there are walls! I peeked in the house this a.m. and the drywallers were going to town. Here is our kitchen - materializing and taking shape! You can see our "cool" insulation, called a "blown-in blanket" system, in the left foreground, and the eating bar area sticking out with the kitchen behind. 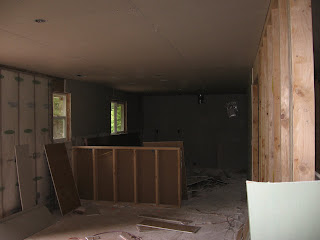 Sorry it's been so long since I've posted. There has been great progress on the house during the last month. We've gotten through the plumbing, HVAC, and insulation stages, and are excited to be moving on to sheetrock. Hopefully, by the end of next week all the walls will be up!!! That has been our goal for so long that it's hard not to think that's the finish line. We'll still have a few minor details, of course (paint, flooring, kitchen, and bathrooms to install :-), but all the major systems are pretty much brand new and in place. What a blessing!

Taylor's been doing great at Tball and really seems to be enjoying his season. After last night's game, he's down to only four left in the season. When I told him that, he said, "That's stinky!" He's not ready for his season to wind down. Here's a video of him "winding up" to bat. :-)

Aric is his usual chipper self. He walked up to Jeremy and I at the park the other day with this question:

Ascha is growing like crazy. With only 34 days left until her due date, she's about the weight of a honeydew melon and about 18 inches long.

Jeremy has been as busy as ever trying to juggle work on the tugs and work on the house and family time. He's doing a great job of balancing and I'm SO thankful for him. This week has been a big one with the insulation going in Monday and Tuesday and an inspection today and then the sheetrockers starting tomorrow. Jeremy was supposed to be on an upriver trip during all of this and I was not looking forward to all the driving around and managing and phone calling and "being in charge," because I just don't feel like I'm very competent lately. My brain simply doesn't work the way I want it to right now. Well, the tug Jeremy was on had a run-in with a submerged log that was 2 feet in diameter, and the tugboat engine was the definite loser, so the trip was cut short. While it is bad news for the tug company, I must admit I'm relieved my hubby's home to deal with overseeing all these projects. He's way better at this than I am, especially right now with my "pregnancy brain." :-)

And as for me and my "update" of sorts, things are just going along and I'm trying to keep up with everything. The only terribly noteworthy news item I can think of at the moment is that I got my first Washington ticket last weekend. I was headed to Taylor's Tball game and I really thought I was going the right speed, but I missed the first 25 sign coming into town. It was doubly frustrating because I wasn't even in a big hurry. There have, I admit, been a few times when I "deserved" a ticket because I was knowingly going faster than the posted speed limit (although I do try to follow the limit, especially when the boys are in the car). Of course, the time I get "caught," I actually believed I was going the speed limit. I ended up in tears with my sweet boys trying to comfort me ("Just take a deep breath, Mommy." :-). I had to try to be a good example of taking responsibility for my actions and it was a good teachable moment about not being able to use, "But I didn't know..." as an escape from consequences.
Posted by JSTA at 8:59 AM 1 comment: