This has been a busy week with two birthday parties for two different friends! We've had a blast at each party. I was gonna post a few pics of the boys at one of the parties and of them on their bunks, but I could only get one picture to upload, so I guess that's all I can send. We still don't have rails or a ladder figured out for the bunk bed, so the top is just for playing on at this point. We got a new, more comfortable matress this morning, so the bed is getting closer to being outfitted. Hopefully next week we'll be able to transition away from the crib. :-) Jeremy's been busy trying to get his tractor up and running. It's been more of a project than he anticipated, but he's almost done, and we're all excited to be seeing another project completed. He's also getting close to finishing his VW bus, and we got to say goodbye to an old VW bus shell this week because Jeremy had finished harvesting parts from it. It's exciting to go from three bus bodies around our house to just one in the garage! :-)

Last week, the whole family made an outing to Target for some reason, and when we were walking through the automatic doors, Aric said, "Thank you, door." That's the kind of kids we're raising! :-) :-) Jeremy and I chuckled quite a bit over that one. We've also noticed he'll say "'Scuse me" or "Sorry" to inanimate objects if he runs into them. It's a pretty fun stage. He often has the typical two-year-old attitude, even though he's not quite two, but I think it helps him survive better around big brother.

We've all been enjoying Jeremy being mostly home this week. It sounds like there's a good chance he'll be headed out again on the tugs later this weekend, but we'll just have to wait and see. You all missed out on an "insider's view" of what his job entails. The other day, he sat down and typed out a long explanatory post regarding his life as a tugboat deckhand, but when he went to attach pictures, the blog closed down. He repeated the entire process again, but had the same results, so he gave up for the day. Hopefully he'll be able to sit down and try again soon.

The boys and I are headed out for a picnic with some old friends - the people I babysat in the summers for a few years while I was going to college. It's always amazing to see how HUGE these teen boys are, because when I started watching them, they were 6 and 9 years old! We'll be attending soccer practice and observing one of the boys, so maybe my boys will learn a few skills! I need to start packing a picnic dinner, though, so I'm gonna sign off now. 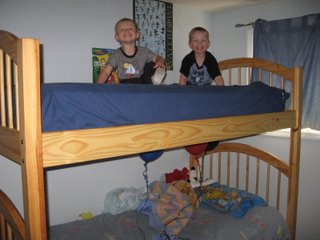 1) We went to the zoo yesterday

Jeremy was out of town for a few days, so the boys and I went to the zoo yesterday with our good buddy Xander and his family. We had a blast. Of course, I never got around to taking any pictures of everyone together, but here are a few cool ones of the boys and an alligator. 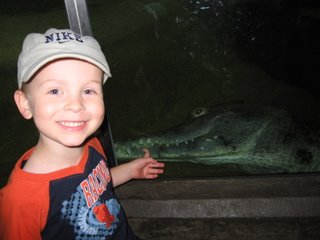 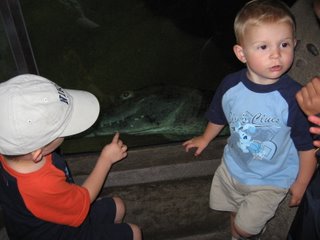 Last week, all the boys went to a barber and got haircuts. It was Aric's first REAL haircut! I forgot my camera, so I don't have any pictures of him in "THE chair," but here's a picture of his curls - now they are gone. He looks pretty much the same from the front, but very different from the back. His side profile looks quite a bit more grown up now. 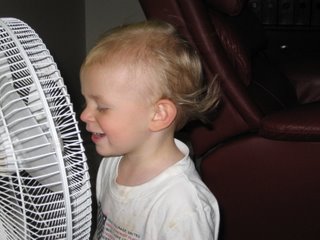 The boys finally got a bunkbed. It's set up in their room, but doesn't have the top matress in until we get a side rail built, since it didn't come with one and Taylor is a VERY active sleeper who occasionally rolls off his bed. We'll get some pics up soon. Aric was unhappy to hear he was getting a new bed. When I told him it was coming, he said, "No want to." I asked why, and he said, "Need my crib!" Then he started to cry. We felt sorry for him until evening came, when he cried again because he WANTED to sleep on the bunkbed and we wouldn't let him (Taylor's on the bottom until we get the top matress set up).

All four of us went camping last weekend at a great little campground near the Oregon coast. We spent the night in our TINY tent, and everyone managed to sleep...at least a little. Jeremy had a harder time than the rest of us, but the boys did excellent! We had fun "fishing" and throwing rocks in the lake, and in the morning we took a walk around the lake. We tried to catch some salamanders or newts (not sure what they were), but didn't succeed. After breaking camp, we drove to the top of Mt. Hebo to catch the view, but got caught between two layers of fog. On the way down the mountain road, the boys both nodded off, so we pulled off and we all took a nap. That helped the rest of the day to go very smoothly. We drove down to Lincoln City and went to Siletz Bay Wayside. We flew kites, found seashells and rocks, threw rocks in the surf, and built sandcastles. It was a great day! When it was nap time, we loaded up and headed home. It was a perfect mini-vacation.

We had a fun week last week with Jeremy being home on comp time. He got another upriver trip, but thankfully it was a short one, and he got home last night! He should have the rest of the week off because of comp time, so hopefully we'll be able to get some projects / chores done around our home. 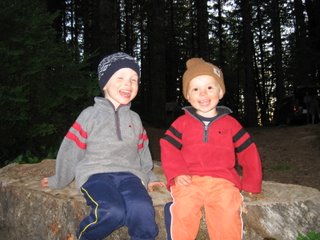 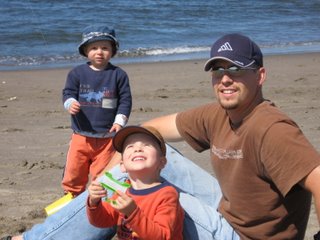 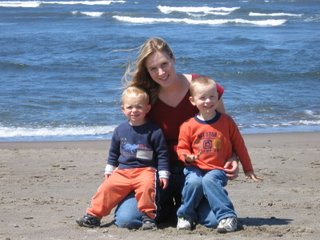