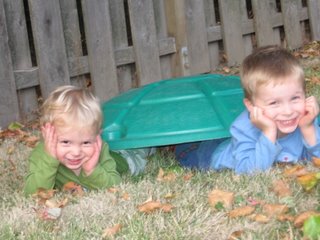 Time sure has been flying by for us (as usual!). I've tried a few times to upload more pictures of what we've been up to, but for some reason, they're all coming up as red x's, so this one will have to do for now. The boys and I had a lot of fun the other day raking leaves into piles then jumping in them and throwing them around. When that got old, they decided to pretend they were turtles. :-)

A few quick highlights on our recent events: I forgot to mention that we went mini-golfing and Tay and Jeremy went go-karting a few weeks ago. It was pretty comical to see these boys trying to learn how to golf, but by the end of the course, Taylor had improved immensely. Aric swings pretty wildly, so it's alright that he doesn't often connect. :-) Maybe he'll have mustered a little more control by the next time we go. Next, a couple of weeks ago we saw some good friends who were visiting from Idaho and went to the zoo with them. Five kids made for a busy but fun day. Later that week, we went to the beach and stayed two nights with another set of good friends. The plan was to go paragliding, but bad weather and overscheduled instructors foiled it. However, we still had a lot of fun hanging out, having a campfire and roasting s'mores on the beach after dark, playing games late into the night, letting the kids watch cartoons in the mornings so we could sleep in :-), tip-toeing in the waves, and playing at the beach (Taylor, David, and Abbie excavated and constructed quite a bit, but Aric was more interested in his kite. He only let go of it about 3 times during the course of the hour or so that he held it...not bad for a two-year-old. :-) As soon as we got home, Jeremy left again for another long tug trip. He's been working pretty much "week-on, week-off" the past few months. It is always a bit of adjustment when he leaves - every morning when Aric comes in to pull my covers off and beg for breakfast (saying "I firsty, I firsty for food"), he cranes his neck to see over me and asks, "Where my dad?" We're all looking forward to him coming home soon! Then we'll hopefully have another eventful but restful (is that possible?) week as a family before Jeremy catches another trip. If he can time the next trip right, we might be able to go to Montana for two weeks' worth of visiting/hunting rather than just one. We're really looking forward to the time with our extended family. :-)
Posted by JSTA at 12:20 AM No comments: