Ascha rolled over from her tummy to her back yesterday for the first time. She was more than a little upset I was making her have tummy time, so I don't know if she really knew what she was doing. I don't do tummy time enough, so she really isn't used to it. But hooray for her anyway!

Aric asked today, during lunch, what the crunchy noodles in his salad were called. I said "Ramen." He said, "Because they're the WRONG shape?" I laughed and said, "Raw-men, or some people call them Ray-men noodles." He retorted, "Well, I'm going to call them wrong noodles anyway, because I don't like them!"

Taylor, at dinner, was talking about being extremely quiet. He said he would be "quieter than the breeze whooshing through hair." I was impressed at that amazing description. I love my kids and am so proud of them at so many moments throughout each day, but I don't record it often enough.
Posted by JSTA at 9:37 PM No comments:

We live such an insular existence here in the US. We are so blessed with freedoms that we take for granted and rarely take the time to appreciate. Unfortunately, many in the world don't share this luxury. During the past week, at least 6 Christians have been murdered, 15 church buildings have been destroyed, and 110 church-members' homes burned to the ground in Orissa, India by a radical Hindu group. And those numbers only represent affiliates of one particular missions organization. Please join me in praying for my brothers and sisters around the world who face unimaginable persecution on a regular basis. If you'd like to learn more about the violence in Orissa or learn how you can help, visit http://www.gfa.org/orissa-update?cm_mmc=GFA-_-Email-_-377991-_-080826
Posted by JSTA at 10:40 PM 1 comment:

Email ThisBlogThis!Share to TwitterShare to FacebookShare to Pinterest
Our Sweet Little Girl


Ascha had her 2 month checkup and her weight is in the 75th percentile and her height is off the charts (so it's considered the 99th percentile). It's hard to believe she's 2 months old!

She's already such a charmer... Check out her sweet dimple and the twinkle in her eyes! 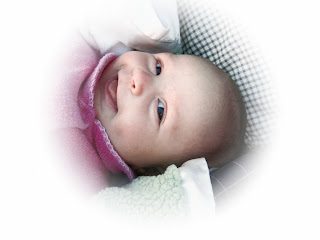 And here she is playing and smiling:


We are all so in love with her and so thankful for the way the Lord has blessed our family through her presence!
Posted by JSTA at 9:21 AM No comments:

No More Monkeys Jumping on the Bed!

We've had an eventful number of weeks and this blog post is way overdue. However, I think I'll start with the most recent event, which occured at roughly 7 p.m. last Saturday night. Aric and Taylor were apparently skirmishing on the top bunk (a strongly prohibited activity) when Aric's face met the bedframe. Now he has five stitches over his left eye. We were able to take him to Urgent Care rather than the ER, but it still took over three hours to have him seen. He was a very brave little boy and only cried a little. He chose to hold very still on his own, so he did not have to be restrained while they stitched him up, which was a blessing to me. Last time he had stitches they strapped his entire body to a board (he was "papoosed") and it was awful. 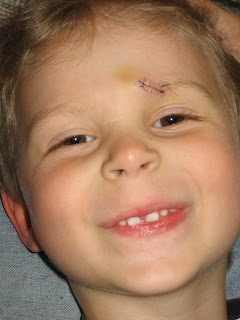 Five days later, the wound was looking great and it was time for the stitches to come out. Our doctor's office told us we ought to go back to Urgent Care to have them removed since that is where he'd gotten them, but none of us were thrilled at the idea of waiting hours on end for a few simple snips with a pair of scissors. We dug out the surgical scissors we took home last time he had stitches removed and I sterilized them (they'd been living in Jeremy's hobby tool collection in the garage :-). Aric was a little trepidatious about having Daddy remove the stitches, but Taylor piped up, "I have a great idea! Let Aric watch TV." (Of course, that meant Taylor got to watch TV, too, but Aric calmed down and ignored what Jeremy was doing, so it was over in a flash without so much as a whimper). 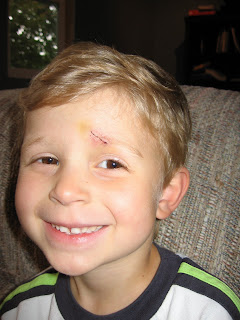 I guess we'll just keep going backwards through the month with our pictures since we started with the most recent event. A few days ago, we finally got around to getting Aric a new bike. Taylor's mastered riding sans training wheels, and Aric's really been itching to get riding again. We picked up a bike that we thought was the same size as Taylor's. When we brought it home, we put the training wheels on it and Aric excitedly hopped on for an inaugural ride. That's when we realized it was too big for him - it ended up being a larger bike than Taylor's, and Aric really couldn't reach the pedals well enough to get around. We groaned and figured we'd put it away for later, because we couldn't take Taylor's bike that he'd just gotten comfortable with away from him. However, Taylor decided he really wanted to trade, and Aric was amenable to that idea, so they both have "new" bikes now. :-) 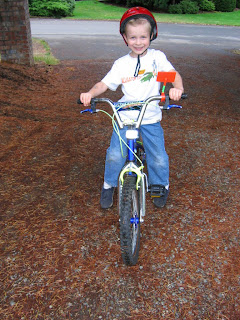 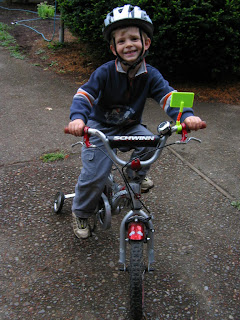 Last time Jeremy was upriver, Janet and I decided we'd be ambitious and take the kids all the way up to Mt. St. Helens since it's practically in our backyard. It was an amazing sight and we really enjoyed the day, except for the ride home (Ascha screamed for well over an hour while we sat stuck in a major traffic jam caused by a brush fire on the freeway ahead of us). We started out at the Johnson Ridge Observatory, where we took this family picture. The displays were excellent and we'd highly recommend visiting this amazing place. The boys loved getting to create their own earthquakes by jumping up and down to make a seismograph needle move. There was an impressive movie about the 1980 eruption, which everyone but Aric enjoyed. He found it a bit scary. 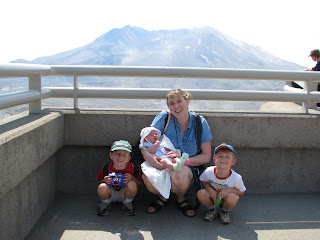 Then we went to the Forest Learning Center, put on by Weyerhauser, where we learned a lot about trees, paper, forests, and animals. It was a great place to stop with kids. We picnicked in the shade and the boys enjoyed a playground complete with a hand-operated excavator and a giant rubberized climbing volcano. Inside the center, there was a helicopter flight simulator which they both thoroughly enjoyed. 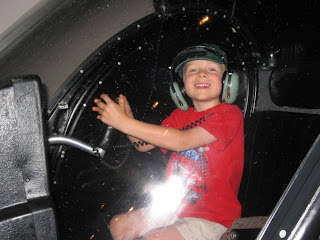 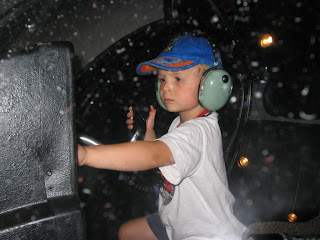 After experiencing the volcano and the forest, we were ready for some fun. After sitting in the aforementioned traffic jam for way too long, we finally made it to Woodland where we enjoyed cooling off in Horseshoe Lake. The boys loved playing in the sand... 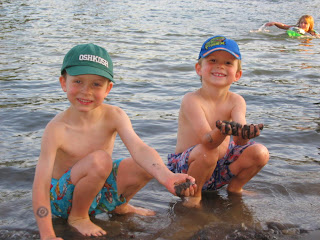 And Ascha loved being out of her carseat! It was a full day of adventure. 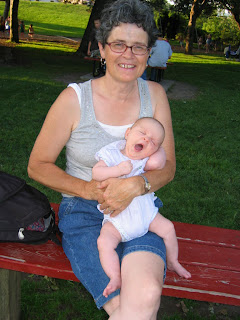 Speaking of Ascha, she's growing like a weed! She's now two months old and wearing six month clothing! She's been smiling and cooing for quite a while, but she tends to be camera shy. If we ever want her to stop smiling, all we have to do is pull out the camera! I have managed to capture a few smiles along the way, so here are a few: 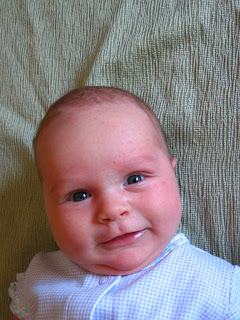 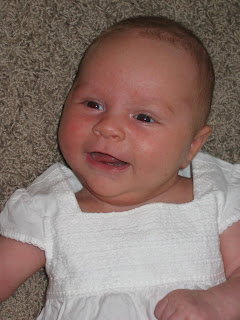 The boys are still loving being big brothers to Ascha. They are rough and tumble a lot of the time, but they can both be so sweet and gentle around their baby sister. They can also be pretty sweet toward one another when they want to be. Aric sometimes gets scared at night and asks Taylor to stay in his bed with him. Usually this leads to playing and/or fighting, but on this particular night, I found them sleeping just inches apart. Awwww! 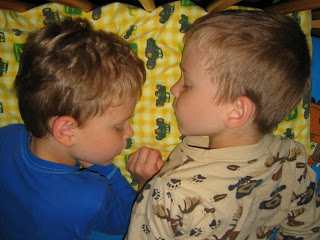 Their personalities become ever more apparent. Here's a fun recent example. The boys are starting to email their long-distance friends, and at the end of one of their emails, they both decided to make up poetry. This is what they said, verbatim:

A little poem from Taylor:
"I love you
How the trees and birds sing to you."

A little poem from Aric:
"See how the warm winds blow and how warm the trees are when you hug them. There might be ants on them, and they might be fire ants, and they bite you, so be careful!" :-) :-) :-)

In early August, the Clark County Fair occurs just 5 miles from our house, so of course, we had to go. We spent a day looking at animals and exhibits, watching a demolition derby and a monster truck demonstration, and wandering the carnival. We let the boys pick a ride, and after a lot of "back and forth," they chose the motorcycle jump. 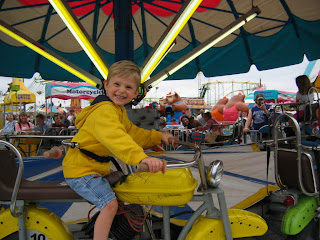 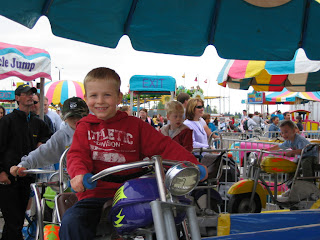 At the very beginning of the month, my parents came out for a few days while my dad attended a work conference. Here they are with all three grandkids. 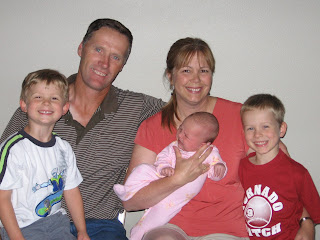 We took a trek up to the Ape Cave Lava Tubes while they were visiting, and it was a pretty cool place (41 degrees! :-). Aric was a little nervous (he gets claustrophobic and we were essentially in a dark hole in the ground), but Taylor LOVED every moment of exploring and talked Grumpy into going all the way to the very end of the cave, even though he had to crawl on his belly to fit!

The boys kept hoping to see a bat or a spider and kept noticing little pockets in the walls where they might find a "bat home." This was the largest one they found. 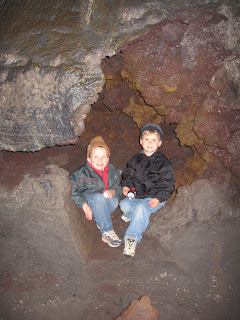 Grumpy and Taylor climbed up onto a ledge overhead - it was a little holey, as you can see. 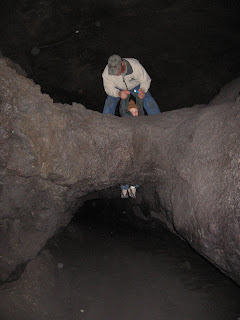 Ascha slept through the whole adventure. 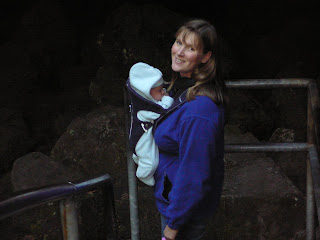 Aric was tired of walking, so he got to ride on Grumpy's shoulders. Here, he's touching the meatball," a piece of cooled lava that floated along the top of the lava flow until it caught at this point. 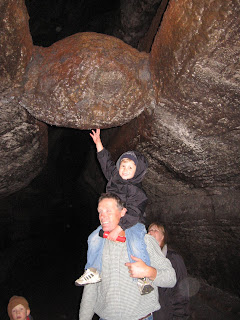 We also visited the "Trail of Two Forests," where you can view a current forest and see the remains of the forest that was swallowed up by flowing lava. The trees were burned up, but their trunks remained as the lava flowed around them. The charcoaled trunks eventually disintegrated, leaving perfect molds, some of which we were able to crawl through. 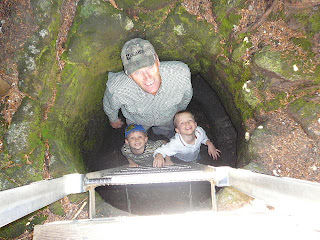