Snow Days
In Mid-January, we had several days of snow and cancelled school. The kids had a wonderful time. The first day school was cancelled, there was NO precipitation on the ground in the morning, but the roads were icy for people living up on the hills. Then we got this much snow: 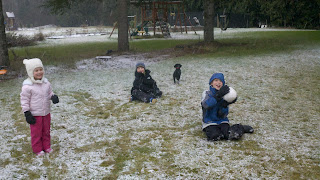 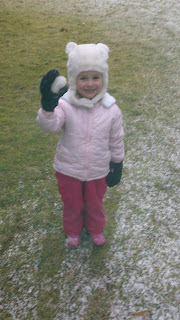 Not much, but it was sure better than nothing!

Later in the week, we got more snow. It was several inches deep early in the morning, down to about 2 1/2 inches when the kids went out and built, and by the next day it had all melted. However, for that one glorious day, the kids had a blast. Several large and small snowmen were built. Here's the "snow family" that Ascha and I constructed. The big snowlady is the mommy, and the little snowman on her lap is the daddy, and all the kids are the little snowpeople on the ground. :-) 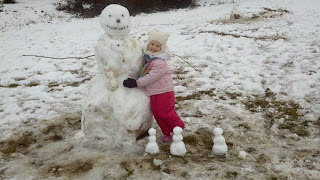 The boys had a blast with the neighbor boys building opposing snow fortresses and having a snowball fight. 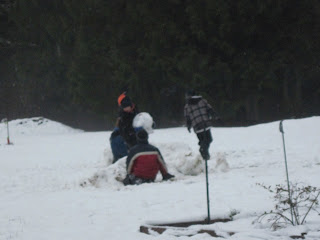 Email ThisBlogThis!Share to TwitterShare to FacebookShare to Pinterest
Aric's 2 Front Teeth
Aric lost his 1st front tooth on New Year's Day. He and Ascha were playing and Aric's very loose tooth somehow caught in a thread trailing from her princess dress. 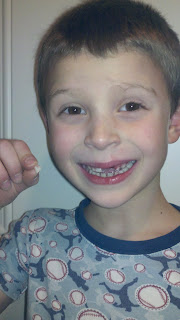 10 days later, he wiggled and wiggled his 2nd tooth until it came out at school. His next door neighbor and buddy, Olivia, had lost her 2nd front tooth just the day before, so I think he was motivated to keep up. 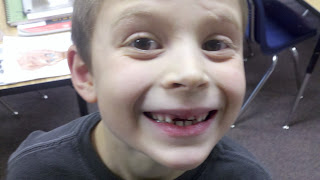 As you can see, he didn't keep his toothless grin long at all...in 10 days that 1st permanent tooth had already made a fair bit of progress, and his 2nd permanent tooth was visible when he lost the baby. Both boys managed to loose their front teeth in January... maybe Ascha will be the one who gets to sing "All I Want for Christmas is My 2 Front Teeth."
Posted by JSTA at 10:16 AM No comments:

Email ThisBlogThis!Share to TwitterShare to FacebookShare to Pinterest
PEPPER
My latest excuse for not blogging has a name and a personality. Pepper is half wire-haired pointing griffon and half mystery. He's a handsome fellow, and very busy. We are amazed at how quickly he has grown.
We got the call in mid-November that Whiff (Jeremy's parents' dog) had surprised her owners with a puppy. She acts like she's going to have a litter every fall, making a nest and acting strange, but she hasn't had a litter in several years. They hadn't even tried to breed her this year, so imagine the surprise! The grandparents wanted to give the pup to our kids as a Christmas gift, and how could anyone turn that down? :-)
Jeremy had been itching for a dog anyway, and Ascha was finally getting old enough, so the timing seemed right.
Here he is at 4 days old:

The kids met him in Montana, then waited a few weeks for him to be old enough to come live with us. Lyn and Janet graciously brought mom and pup out and stayed a week with us, so his transition was very easy. He came to us at 8 weeks weighing 10 pounds. (Wasn't he cute?) 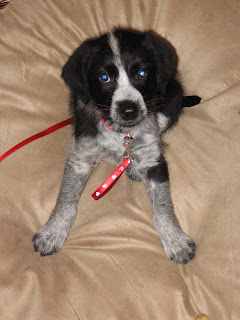 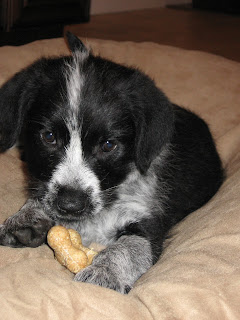 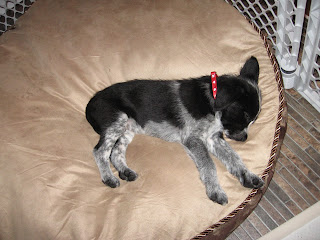 He's grown quickly! He started in our cat carrier, but he's had to move up to a bigger crate. He can't even fit on top of it comfortably now, like he could when we snapped this picture at 10 weeks. 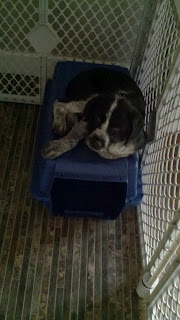 Now, at 14 weeks, he weighs 25 pounds. As he's grown, he's gotten more "whisker-y." His whiskers on this side are all black, but on the other side of his muzzle, he's got one clump of white ones. He also has little white hairs that are not so wiry. They grow in a tuft on the top of his head and stick up for a little "faux-hawk." 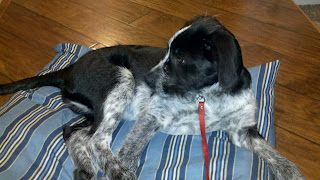 The kids are mostly loving him. They do concede that he takes a LOT of work, and sometimes they wish they didn't have to help out so much, but that comes with the territory. They run him around, feed him, clean up after him, and go with him to Puppy Kindergarten each week. Both boys are great, responsible dog owners! We're proud of them and we're all enjoying our little Pepper.
Posted by JSTA at 10:03 AM No comments: