We have signed papers on our new house! We are almost officially property owners again. The loan should close by Friday, and then we'll get to work in earnest. We are so thankful! :-)
Posted by JSTA at 11:49 AM 1 comment:

Taylor's Birthday and Christmas
It's been a very long time since I've updated, so here's a long, picture-filled post. Taylor turned 5 on December 9, but we started the celebration while we were in Montana in November and continued it all the way on through the entire month of December. Taylor's first round of partying and presents occurred at Grammy and Grumpy's. 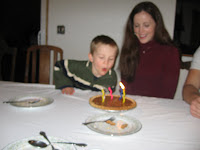 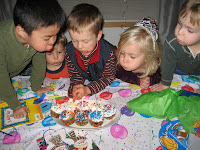 Then, on our way through Idaho, he celebrated with his special friends there. When we came back to Washington we had a small family celebration on the actual day of his birthday. 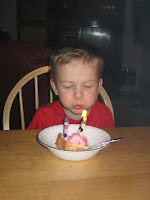 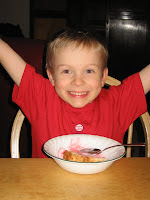 He had been asking us for months if we could make sure he had a friend birthday party (Aric did not have one and I think that caused Taylor to worry greatly), so a week after his birthday, we celebrated with a bunch of his friends from Oregon. Thankfully, Matthew and Jonah's mommy opened her house to us so we didn't need everyone to travel to Washington. The boys had had fun making an easy gingerbread/graham cracker house the week before, and on the same website where I had discovered "cheater's" instructions (use cardboard for the frame and just stick the crackers to the outside - my kind of craft project :-), we saw an idea for snowman cupcakes. Taylor wanted to try his hand at making them, so we had a snowman-themed party this year. We had so much fun having so many great friends together - it will be a cherished memory for a long time to come. 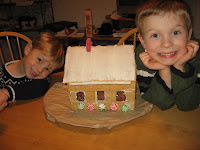 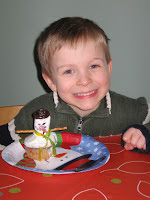 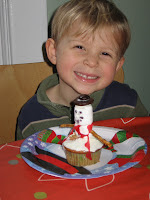 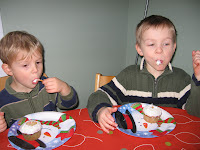 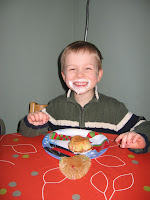 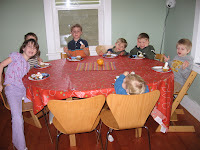 A week after that party, Jeremy's parents came out to visit and brought more birthday gifts from various family members, so we had yet another party. This time, Grandma made him a gummy worm pie. When all was said and done, Taylor had five separate birthday cakes...in terms of memories (not to mention GIFTS), it was definitely not a bad haul! :-) I think Taylor may have reached the zenith of his birthday career. 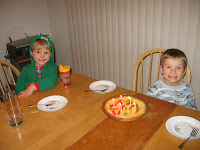 Of course, as soon as Grandma Janet and Grandpa Lyn came, Christmas was upon us. It wasn't a "normal" Christmas at our house. Our decorations are packed away at the very back of our storage unit, so we decided to keep things low key and have a Charlie Brown tree (notice it in the first picture below - it's a whopping 18-incher!). The only other decorations we had were what the boys made in Sunday School, but it made life very simple and was actually a nice change. 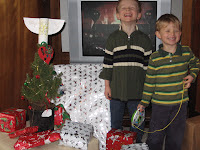 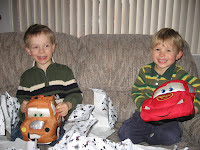 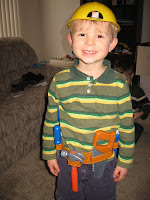 The New Year celebrations came and went so quickly I didn't find a chance to blog (that's my excuse and I'm sticking to it), and Grandma and Grandpa just returned to Montana this week. They'll be back soon for another brief visit, and then they'll be headed south for a while and then on up to Colorado to be with Jeremy's sister when she delivers her first baby in March. We've had such a fun visit with them and it's been really nice to have family around during the holidays. We haven't been able to celebrate a Christmas in Montana for about 7 years, so it was very special to have a little bit of Montana come to us. I've been thoroughly spoiled by having Grandma help out with cooking and cleaning, and she even babysat the kids all day, every day for about a week (with some help from Daddy and Grandpa) so I could attend a 1-week intensive seminary class. It was a great experience for me to get back to school and I feel so refreshed spiritually and "mommily" from having such a significant break from the kids. The kids, I must admit, weren't so gung-ho about the deal. It was fun for a few days, but by the end, they were asking and telling me not to go back. The sweetest thing was when I arrived home one evening and Aric threw his arms out wide and ran toward me, shouting, "Good morning, Mommy! I missed you!" It doesn't get much better than that!
At the end of Grandma and Grandpa's visit, they treated us (and themselves) to an afternoon at the Rivercity Bluegrass Festival. Taylor and I went for most of the afternoon, because we didn't figure Aric would have the patience or stamina to enjoy 6 hours of live concerts. Jeremy ended up being called to work, though, so about half an hour before things wrapped up, he dropped Aric off at the Convention Center for a perfect 3-year-old's dose of music. Although Taylor was overwhelmed by the end, it was, all in all, a very fun experience. Thanks, Grandma and Grandpa!
In other news, we have been waiting for a month to get one single signature so our house deal could move forward. We finally have that signature and have set a closing date of January 25th. Thank you Lord! It's been a much longer process than we are used to and we've learned a bit about trust and patience along the way. :-)
Jeremy's schedule at work has shifted, as it does every three months, so he's now back to a "normal" weekend schedule instead of always working Saturdays and having Mondays off. He has also moved from day shift to swing shift, so we're enjoying spending our mornings with Daddy. Once we have closed on the house, he'll be spending most mornings up there working away, but it's kinda nice to enjoy this lazy "calm before the storm."
Our newest addition is still doing well. We are now 16.5 weeks along and the baby has advanced in size from lime to plum to lemon to apple to avocado. Although these are obviously not the most accurate descriptions, they keep things exciting for the kids. We have visited YouTube and watched ultrasound videos of babies that are at the same stage as our baby, and Aric always ends up putting his hand on my belly with a look of rapturous anticipation. It always fades quickly, and I don't think he really believes our baby is moving around and kicking like those babies on the movie, because he sure can't feel anything! The boys are both quite opinionated about baby names, and I'm quite sure whatever we pick out won't be satisfactory to them. Taylor started out thinking Lilly was a nice girl's name (which it is, although it's not one of our favorites), but last night he had changed his mind to "Flower." Aric, being the impish 3-year-old he is, has decided the baby ought to be named "Taco Salad." This is less surprising once you know that he's renamed himself "Hot Dog Butterfly" and his Grumpy "Christopher Robin Hot Dog." Did I mention that he happens to be in the middle of a growth spurt where he's hungry all the time?
Taylor always amazes and surprises me with his sweetness and creativity, and he's been on an especially creative tangent lately. I would love to scan in and share all of his artwork, but that would take days. Here are two of my favorites selected from his recent (as in, the voluminous crop he cranked out just yesterday) artistic endeavors. He's also reading up a storm, which is so fun for all of us, and he's getting better at writing and math all the time. He is largely self-directed in his pursuits, and it's so fun to see such a voracious appetite for learning different things each day. 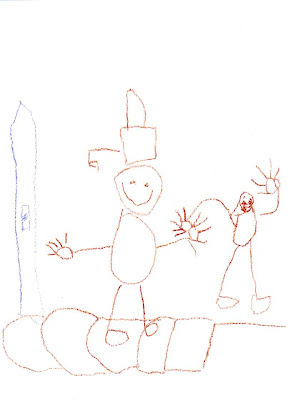 (This one is for Daddy and it makes me laugh every time I see it. Daddy has a pot on his head (obviously) and Mommy is wearing a night cap. His newest development is to give his "people" hands instead of having their fingers stick out of their arms. I love it!) 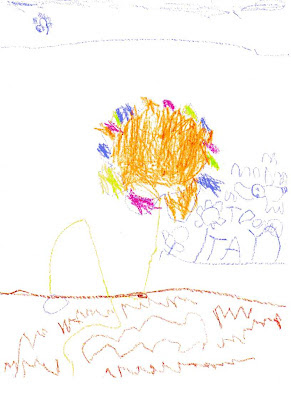 (This one is for Mommy. You can see he's written "Mom" and "Tay" all over one side of it, and there are lots of worms in the ground to help this flower grow well and be happy.)

I'll close with one movie of the boys opening a few presents. I think every Christmas since having kids has gotten more fun, and this year was no exception. We are so thankful for the joy and life they bring to our home.
Posted by JSTA at 5:33 PM No comments: