Fall Biking and Other Adventures

We spent several afternoons biking up and back the Moulton Falls trail this fall. Anyone have any great ideas for what to call that shuffle / waddle you do as you walk your bike while still straddling it to make sure your kid on the trail-a-bike doesn't tip over? "Shufaddling?" Well, I did a lot of shufaddling over the 5 miles as Ascha didn't like going up or down hills on the Trail-a-Bike, and the dog was a little excitable when passing other canines. I think shufaddling could be a new fitness craze: It's a great way to tone your inner and outer thighs! 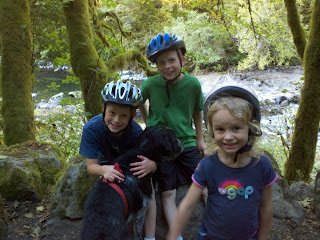 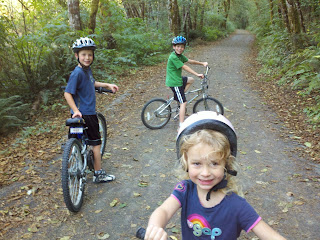 It's always fun to cool off near or in the water after a long ride. 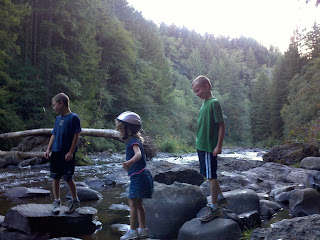 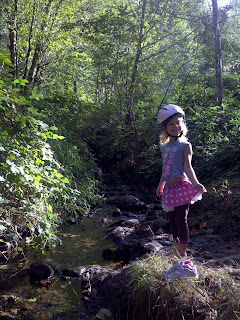 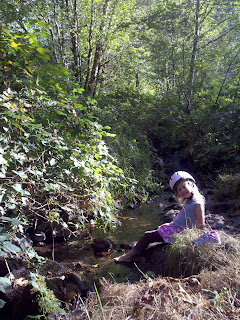 For his birthday, Aric received a very cool shadow box full of neat rocks for his collection from Grandma Janet and Grandpa Lyn. Taylor wanted one, too, so he asked Jeremy if he could make one. Jeremy gave him a long piece of trim board and advice when he needed it, and Taylor did all the measuring and cutting to make this frame (Jeremy did have to help attach the sides, but Taylor nearly had it). He has his own rock collection shadow box now, and he felt a great sense of accomplishment in making it for himself. We were very proud and impressed! 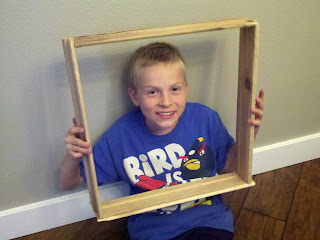 We were also impressed with Aric, because that boy does NOT like to save up his spending money. However, rather than frittering it away on dollar items, we talked him into saving it up until he had $18 (having birthday money come his way helped him reach his total with a bit less willpower than would otherwise have been required). He went to the sporting goods store and purchased "the knife he'd always wanted." He'd been pining for a fixed-blade knife for quite a while (why? I have no idea, except that he's so very rough and tumble and into everything manly), and managed to pick up this bowie knife,  a smaller companion knife, AND a sheath (very important to him!) on clearance. He was very pleased with his purchase, and had a hard time waiting the two days for Dad to come home so he could go over the rules for this new tool (I'm prone to say, "You can use it when you're 18," so I let Dad be the one to establish reasonable rules of use). Finally, when he was allowed to use it, Aric happily spent an afternoon cutting down weeds and tree suckers. Whatever floats your boat, Buddy. 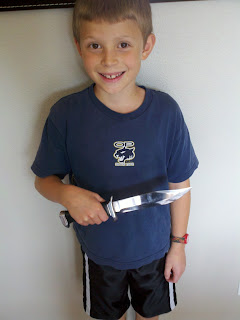